Reuben H Ward:His Body was Thrown in the Tennessee River (#2 of 52 Ancestors)

My grandmother told the story of her grandfather, Reuben H Ward, a Methodist minister who was murdered. She said he was on the Tennessee River going to preach and someone murdered him and then threw his body overboard.

Several years ago, I came across a newspaper article that another researcher had found about this tragic event. It not only affirmed my grandmother's story, but it also added some crucial information:

Tonight, I found two more items about my great, great grandfather:
The newspaper article changes the way I envision Rev. Reuben. It states he was "intoxicated" and had to be "aided" up the river bank. Also, he had an existing "emnity" with the alleged murderer, Charlie Ledbetter. Somehow, I always envisioned someone trying to rob him!

I believe there is more to find on this story. In fact, this article starts by saying "It will be remembered by our readers..." and I haven't found the article they are referencing! I also hope to find the court records for this case. But, for now, this is the story of the (alleged) murder of my great, great grandfather, Reuben Houston Ward.

It will be remembered by our readers that Reuben H. Ward, then a citizen of Lexington, was put across the Tennessee River at Perryville on the night of November 13, 1906, by William Rogers, a young white man, and a negro named Scott. Rogers aided Ward, who was intoxicated, part the way up the east bank of the river, and from that time until December 9, when the unfortunate man's body was found below Jacksonville, his fate was but a matter of conjecture.

Suspicion, however, pointed to Charlie Ledbetter, as there was said to be enmity existing between him and Ward.

When Ward's body was discovered and brought to Perryville, an examination was made by Drs. L. V. Frazier and S. A McDonald, and there were rumors of that examination showing evidences of Ward having been murdered.

Recently it was developed that a boy named Lonny Downs, who lived with Ledbetter and had left for parts unknown, knew something of the matter, and when he was located at Cumberland City he was arrested by a deputy sheriff and brought to Linden.

On May 15 a warrant for Ledbetter's arrest was issued and later was served upon him at his home in East Perryville. Thursday of last week the preliminary trial of Ledbetter was begun in Linden before Justices Tinin, Curl, and Hinson and was concluded Friday.

We are informed that Down testifies that Ledbetter killed Ward and forced him by threats to help throw the body into the river. Ledbetter was jailed without bail to await the next session of circuit court at Linden.

Reuben Houston Ward was born 14 Jan 1859 in Perry County, Tennessee and died 13 Nov 1906 on the Tennessee River near Perryville. He was the son of Carroll Houston Ward (1826-1863) and Martha Ann Whitwell (1830-1904). He married Sallie Harriett Dickson (1860-1960) who raised my grandmother. Reuben and Sallie had eight children who survived to adulthood and one who died as an infant.

(Thanks to Amy Johnson Crow of "No Story Too Small" for creating & hosting "52 Ancestors"!)

Newspaper sources:
UPDATE: I found another newspaper article on 27 Jan 2015. This one is from right after the body was found. Here's the article:

R. H. Ward who started to his old home in Perry County about three weeks ago, got as far as the Tennessee River and was ferried across and his whereabouts have been shrouded in mystery. His son and other relatives have been on the search day and night since his disappearance and not until Sunday night was his body found. It seems that he was drowned, as the body was found ten miles below Johnsonville, and there were no signs on his body to indicate that he had been foully dealt with.    Lexington Republic

It seems that Ward was drinking at the time he was ferried over the river. As it was dark at the time, the supposition is he walked into the river and was drowned.

Do we share common ancestors? I'd love to talk! Please write me at drleeds@sbcglobal.net
at January 12, 2015 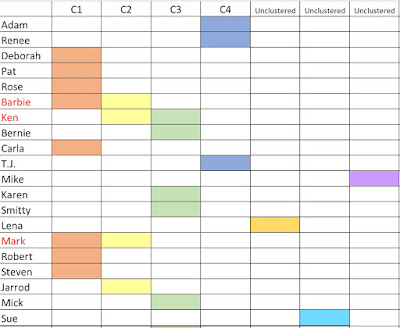